Check out my opinions along with all the others at the Stinkylulu 1976 Supporting Actress Smackdown.

I have some thoughts about the year in general, and have been thinking about politics, disillusionment (elections figure into two of these, and it's an interesting 70s theme) and discontent, but I have a cold today so any thoughts would be muddy. Or, muddier than usual. Interesting year, though......
Posted by Criticlasm at 10:19 AM No comments:

I went to the Getty to see the beautiful Bernini show that was overwhelming and gorgeous. I hope to get a few secs to write about it this weekend, but in the meantime-- 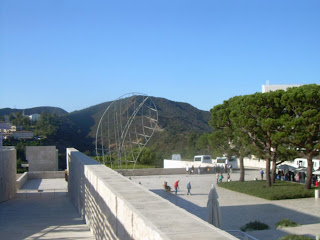 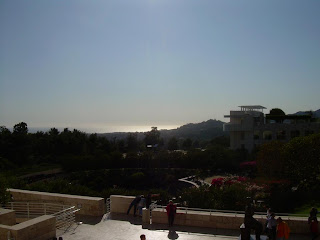 Muuuuch better....
Posted by Criticlasm at 4:13 PM No comments:

Happiness is just a thing....

I watched Cabin in the Sky last night for Nathaniel's Musical of the Month over at Film Experience. Here are the major themes, not including all the race stuff, which could be a whole 'nother book, and probably is. There's even a disclaimer at the opening of the film, which, as Nathan Rabin points out, basically says"The racism in the film you are about to see is morally abhorrent and wholly unforgivable. Enjoy!" Anyhoo, most of the things I noticed only were amplified by some sadness that some of the performers were relegated to roles based on their ethnicity, and weren't given a chance to stretch out of that (of course, that could be said for many film actors). Like I said, for more keen and informed minds than mine to ponder further.

Ethel Waters rules this movie. She's not the protagonist, but she's his motivation. She's also the most reliably nuanced, interesting, and full characterization in the film. Not surprising, as the story doesn't require much beyond stereotype. It made me a little sad, watching Waters, that she wasn't able to play some grand matriarch of a powerful family on film. I was thinking this through much of the film, and then when she hands Butterfly McQueen the dice and sweepstakes ticket and says "Burn these, Lily", I was sure of it. That said, she's riveting in this, and I don't really want to watch anyone else on screen when she's in the picture. And she had quite a career, which is a testament to her talent.

Happiness is Just a Thing Called Joe. I have loved this song forever, and didn't know this was the setting. I love, love, love this song. Her execution is great. It works perfectly as a motif, and justifies shy she does what she does. That said, if Iago is evil for no apparent reason, Petunia is the love version. It's no small credit that we believe the love for Joe on her part, because it's not like it makes any sense. This song does it for me (even though secretly it's Ella's version I love the best--even though this Sarah Vaughn version is pretty fab. And I do love the Carol Burnett version, too. So, I basically love this song, obviously).

Lena Horne's character, Gerogia Brown, doesn't make a heck of a lot of sense, either. But once again, she can't help but be, well, Lena Horne. I was most fascinated by the shot of her being the last standing during the tornado. There was something beautiful and emotionally affecting about her staggering about in that beautiful dress, and suddenly accessing a life in this character that we hadn't seen before. Once again, great performer. I mean, she's Lena Horne, after all. The scene with the devil telling her what to do was fun. Much mugging, but a good way to establish the communications of conscience that they were establishing. And since I had Tennessee on the brain earlier, wouldn't she have been astounding as Maggie in Cat on a Hot Tin Roof?

And then there are the devils. Apparently, jazz, trumpets, and smoking are all very evil, while good guys like to hang out in all -white band uniforms. I don't really have much to say about them (although it was fun seeing Louis Armstrong), except that if you're looking for a piece that combines Porgy and Bess and Damn Yankees, this one's for you.

As for the music, most of it felt weirdly incidental. As Stinkylulu pointed out the other day, it's really more of a play with music, and that makes it more understandable. Actually more of a parable with music. I did love that when for no apparent reason an entire chorus showed up for the "Cabin in the Sky" number, they sounded exactly like the back-up choruses for every musical in this period. Duke Ellington on screen is great, too.

And the whole thing can be excused, since it's only a dream.....

Glad I saw it. Great musical, no, but worth it for Waters and Horne and the chance to see them at the center. And to hear that great song by Harold Arlen, who is one of my faves of the period (Stormy Weather, The Man That Got Away, Acc-en-tuate the Positive, Over the Rainbow, A Sleepin' Bee, I never has seen snow, Right as Rain, I had myself a True Love, Anyplace I hang my hat is home, Get Happy, My Shining Hour), and also wrote several specifically all-black musicals. And also the to get to see the dancing and the Duke Ellington sequence. It doesn't move the story, but it's great to watch.

I suppose the disclaimer is right only insofar as the movie succeeds most for me as a time capsule--of attitudes, performance styles, and people. I'm glad Nathaniel picked it.
Posted by Criticlasm at 1:37 PM 2 comments:

4. Lucky for Carol that her mother conveniently blacks out for no apparent reason. Or maybe it's just when she drinks. Or there's a MURDER!

5. Someone on the "making of" suggested Crawford would have gotten an oscar nomination if this were a different film. Yes, and a different script, character, and director

6. Even if you are a sculptor, oh, I mean sculptress, of non-descript, unfired clay forest creatures, it's possible to bust out a full polished bronze bust, just cuz. Oh, and some bloody heads. And a latex mask.

7. I love jangly bracelets, because they say "gal"

9. Apparently, Lucy had money from her first husband, but still lived in a one room shack where her daughter slept in the living room. That's livin'! And Ohio looks a lot like central CA.

10. Apparently, right before you're head is chopped off, it turns to wood. It's bloodless, too.

Okay, 11. Horror movie or Scooby Doo episode; you decide.
Posted by Criticlasm at 10:08 AM 1 comment: