The Supporting Actress Smackdown for this year's Oscar nominees is up. Yours truly participating. Check it out!
Posted by Criticlasm at 6:23 PM No comments:

Children are Bored on Sunday

I podcast in my car, and it kind of makes up for the loss of subway reading time now that I'm in LA. I have a few faves, and two short story podcasts. This is kind of funny to me, since I don't really love reading short stories. But I really love hearing them read.

If you have an extra 36:44, then take a listen to Jean Stafford's story "Children are Bored on Sunday", which touched me deeply last night when I was listening to it. Hilton Als, the New Yorker theater critic, picked it to discuss on the New Yorker fiction podcast, a monthly series where a writer chooses a story from the magazine's archive and reads it, then discusses the story and the writer. There have been some great ones. I even like the title of this episode, "Invalid Souls", which can play on either pronunciation of invalid, which that word always does. The story was first published in 1948, and I'm surprised how deeply it hit me. You can also read it in the online archive if you subscribe, but it's wonderful listening.

The action is a woman looking at art while avoiding a man she sees, but it's really about her mental state, her drinking, her collapse, and her fragility. I guess since I love the Met, where it's set, and Stafford beautifully catches these moments and the action of her mind drifting from where it should be. Also an incredible picture of mid-century New York intellectuals and what it must have felt like in that demi-monde. There's a great description of never-ending cocktail parties which weren't work, but weren't for fun, either. There was great competition, and conversation about art and ideas, people creating themselves and judging others. It's fascinating. Something about the way she was thinking really got to me. It's a beautiful story. It makes me want to read more of her stuff.
Posted by Criticlasm at 9:49 PM 4 comments:

I've been wanting to write, but I've just been a mite busy. I'm assistant directing a production of Side by Side by Sondheim, which has been a great learning experience. So every workday but Friday I get up, go to work, go to rehearsal, and go home to bed. And there's rehearsal on weekends as well. So, needless to say, a few things have fallen by the wayside, writing being one of them. And cleaning my apartment. And laundry.

But I have not missed a day on my promise to write on War and Peace a chapter a day, though I have to say when I get home at 10:30 I'm not so keen on reading about a war on Napolean and blogging on it. But I am doing it. If I managed during surgery, I'm not about to stop now. And I'm not kvetching - it's enjoyable and a nice wind-down. Certainly a whole 'nother world

Anyhow, now I'm keying up to make a couple of hats. I suggested that we have a couple of large hats for the women to wear while "Beautiful Girls" from Follies is playing. And then I said "I'll make them!". Huh. So I'm skipping from rehearsals this weekend and shopping for hat supplies. I sketched them and the look something like this: 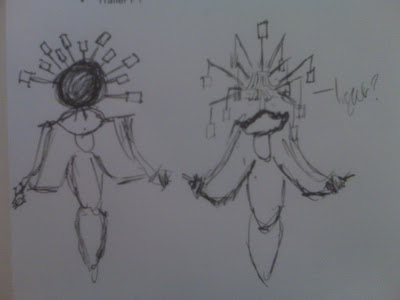 Each of the little squares will be a poster for a Sondheim show - one will have spikes coming from a large glittery white orb. I was thinking the other should be on a pagoda, but now I'm going to see if I can perhaps get a small, portable lamp and do a couple of lamp shades, and then cards will hang on fishing line from the wires. Then just spray it all in translucent glitter. Comedy. There will be pieces of fabric attached to rhinestone (if we can afford it) cuffs that will easily clip on and off the wrist. And, of course, a chin strap.

For All You Writers Out There

Elizabeth posted a link to Magpie Tales, who posts a photo to prompt fiction/poems, etc. Each Friday there will be a photo, and each Tuesday you link to this link site with your piece.

Sounds like it could be fun? If it does, then link away!
Posted by Criticlasm at 11:04 AM 1 comment: 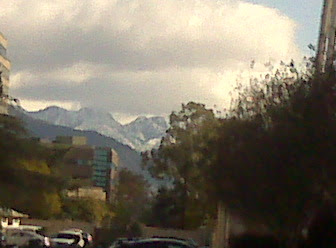 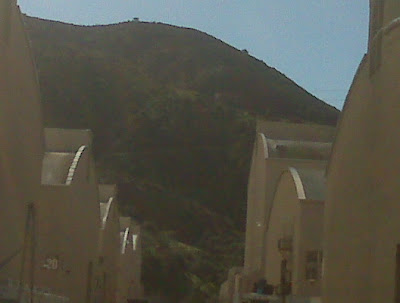 A short paean to the weather. I took a couple of cell phone pictures at work (above), which do nothing to describe the spectacular weather this morning.

LA is stunning after a rain. At least this part of LA - near the hills and the break between valley and valley. Yesterday, as it started to clear, we had three rainbows over the hill behind the lot, and the valley around had specials coming through the clouds. One building would be lit up as if glowing from inside, while next to it would be shadow. It really looked like Hollywood, as if some lighting man might step up and adjust the beam, and the whole picture would shift.

Today, it was unusually brisk as well, so it was clear, and crisp. I love these days. The Hollywood hills are a vibrant green, and the clear air makes the hills and grass look so voluptuous you want to reach out and touch them. Houses are tucked in between the trees, feeling cozy. The light is a bruise of gray with piercing sun, clouds are floating like stretched cotton on a blue, blue watercolor. Everything looks so close up it’s hard to judge distance.

Behind the studio, the hill dazzles, light changing seemingly by the moments as the clouds rush by heading west. There is a little tree that stands at the top, or that's what I think it is. When the hillside burned a couple of years ago, and transformers popped and exploded, the next day a lone tree was still on the top of the hill. It's always looked to me like a pig on a stick, so I call it the pig tree. I guess I could climb up there one day to see it up close, but I'm sure it would transform.

I am a mountain person. I love them. Take your oceans – they’re nice to visit, but from the Green Mountains in Vermont to the Hollywood Hills, I love the plush covered crags and the solidity. And it breaks up the eye. I lived on the plains until I was 12, endless corn and sky that seemed to stop at the end of every field. Mountains let me know how big everything is, but don’t overwhelm me with the impossible infinity of seas. I feel protected by mountains. Always have.

Then you look at the Valley. The mountains in front are desert hills; rocky, craggy, with bits of brush and brown as sand. Behind them, all the peaks are covered in snow, and since the snow level was down to 500 feet the whole mountain is dusted. Majestic. Your face feels just this side of numb, to remind you that you’re human, warm inside, and able to sense the elements with thermometer-like sensitivity. Outside and in your body.

365 degrees and scenes from desert to snow to tropical. It’s on these days I am ecstatic to live here. I used to hate pineapple. I had only ever had canned, so I thought it was nasty - syrupy and strange-tasting. Then my parents went to Hawaii and brought back a fresh pineapple. It was so sweet that I couldn’t believe I had ever mistrusted its gifts. And now, I can eat canned pineapple, since I know the platonic ideal of pineapple. It makes the other stuff more palatable. That’s the way I feel about LA – I know it will be brown and hot, possibly soon, and some days I won’t even see the mountains. But I’ve seen the platonic ideal, I know what’s hiding there. I want to tug on everyone’s sleeve on days like today and say “oh!oh!oh! Look at how beautiful it is! Today! Don’t miss it!”

On days like this it’s hard for me to feel anything but glee. I sit in my car and applaud.
Posted by Criticlasm at 8:30 AM 3 comments:

So, I'm still going to write about it at some point. I'm thinking it might be too early to head back to work tomorrow. I haven't tried to drive. I think I pushed it a bit yesterday. I developed a bruise, which I hear is normal, but it freaked me out. Really not loving abdominal pain, I have to say.

So today I sat home after a friend took me to buy fresh veggies at the farmer's market, took a nap, watched Antiques Roadshow, and six episodes of 30 Rock that I needed to catch up on. The other day I watched Reefer Madness, the musical (okay, not great), and Bernstein's Trouble in Tahiti from the BBC about a difficult marriage.

I have to say, when you're couch-bound, the serious stuff isn't the best to watch. A friend was going to see Fish Tank, which is supposed to be great, but I just didn't think I could stomach it - no pun intended. Tanya picked me up and brought me over ther for chili and tea, and to chat during the second half of the Super Bowl. So glad they live close, and really grateful to have such wonderful friends, cuz I can get a little stir crazy.

Peter and the Wolf

While I was writing today's entry for A Year of War and Peace I thought for an instant that the name of the cat in "Peter and the Wolf" is Sonya. It's not--it's the name of the duck.

But that reminded me of this really special Oscar-winning short of "Peter and the Wolf". If you haven't seen it, do yourself a favor and watch.

The Immortal Life of Henrietta Lacks

This book looks fascinating - the first paragraph from this Times article:

Fifty years after Henrietta Lacks died of cervical cancer in the “colored” ward at Johns Hopkins Hospital, her daughter finally got a chance to see the legacy she had unknowingly left to science. A researcher in a lab at Hopkins swung open a freezer door and showed the daughter, Deborah Lacks-Pullum, thousands of vials, each holding millions of cells descended from a bit of tissue that doctors had snipped from her mother’s cervix.

The book is about the story, the incredible things that have been done with what turned out to be "immortal" cancer cells, and what rights, if any, the family has to the billions of dollars that have been made from the use of the cells.

It sounds like this is becoming more and more of an issue, and mixing in that with class, race, and the last 50 years in the US, this looks like it could be an amazing book.
Posted by Criticlasm at 11:18 AM 3 comments: 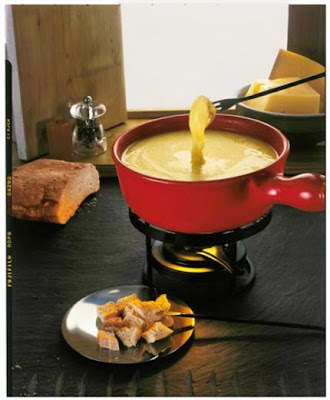 Elizabeth over at a moon, worn as if it had been a shell is giving away a cast iron Rachel Ray fondue pot.

You do not fondue Rachel Ray, she is the celebrity spokesperson.

My favorite fondue memory, aside from the sweet taste of the meat when I was a kid (ah, the 70's), was going to see Aida in the park for one of the Met's free concert. The woman who organized said she'd bring a little something, and brought a fondue pot with fruit and chocolate and a sterno. Wow. So we ate dessert fondue while watching Sharon Sweet in Aida. Pretty great.

So go visit over there and leave a comment to enter. And if you haven't visited, check out a really great blog while you're at it!
Posted by Criticlasm at 9:17 AM 1 comment: